Happy Memorial Day everyone! I hope that you have a great day enjoying the beginning of summer with cookouts and good times. As you celebrate, I also hope that you would please take a minute to remember those who gave themselves for our liberty and freedom. The very essence of sacrificial love on this Memorial Day.

I want to tell you a quick story of my father who learned firsthand about sacrifice. My father was a young man in the ’40’s and like most young men in that time period, they were either drafted into World War 2 or voluntarily signed on. He did just the latter, he signed on at the age of 17 (he told a fib about his age) and along with 2 other young men from his hometown, was taken to boot camp.

He and the 2 other men, of course, started to hang out together since they had the same hometown and some common interests. Intense training began and during the course of that training a drill instructor told the entire group this.  He said; “Get into groups of three” so my dad and his friends did just that, then the DI said; “Look around you, there are three of you together now but in battle only one of you will make it!”. What a scary thing to hear. I’m sure they, as young men, thought that that was silly and moved on in their training.

Once their time learning and preparing for battle was finished the men were separated and shipped out at different times. My dad had learned that the 2 friends from his hometown were in the first wave to land on the beaches of Normandy on June 6, 1944, D Day. My dad’s troop was shipped to the same location about 5 days later. When he arrived, he saw the destruction of the beaches, the chaos left over as the battle had moved inland and he also saw his two friends.  The words of the instructor returned to my dad’s mind, he was the one out of three that had made it.

I remember him telling me this story because it was quite unusual for him to share anything of his time in the war. And it has stuck with me. It also makes me realize that my dad knew very well, firsthand, the cost that was paid for our country’s freedom and for the freedom that we all enjoy even to this Memorial Day.

We as Christian’s also know the cost of freedom and salvation that has been paid for us! Our Savior died a gruesome death, in our place, so that we may live. That we would be set free from sin.

On this Memorial Day we should remember with honor those who served and died for this country for our freedom. More importantly and on every day of our lives we should remember Christ who died for our sins. Then, with great thanksgiving and joy we must go out into the world and live our lives for Him!

P.S. Someone sent this beautiful picture of a God sighting after reading about it in May 10th’s A Moment To Praise: What Do You See?. Enjoy! 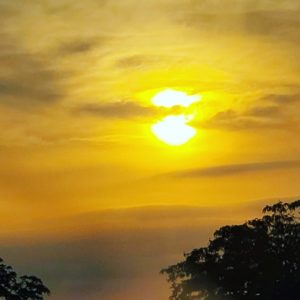